Who was James Gordon Bennett Jr.

Born with "silver spoon in his mouth," he was heir to the New York Herald.

First American editor to explore the international scene and solely responsible for the shameless publicity stunt and marketing ploy to sell newspapers: he promoted and financed the Stanleys' expedition in quest of Livingstone.

Introduces polo to Newport on July 10, 1876. Victorious, along with Lord Mandeville, he is the only one wearing proper polo attire by sporting high top boots, light pants, and a blue and white shirt with matching cap.

Stories surrounding him abound and reach legendary proportions. The Newport Reading Room incident concerns Bennett and one of his polo buddies, Captain Candy, better known as "Sugar Candy." A wager was concocted whereby Sugar Candy would mount his polo pony and ride up the short flight of stairs into the exclusive club located on Bellevue Avenue. Bennett was reprimanded, Sugar Candy supposedly shown the door for the last time. As the story goes (never proven), Bennett started the Newport Casino in response.

He was a notorious indulger in the demon drink and women.  While screaming and yelling, he enjoys riding in his four-in-hand coach stark naked in the countryside.

He abruptly halts a New Year's party at his future in-laws by impulsively relieving himself in front of the guests. One version places this unmannerly act in the grand piano, another in the fireplace.


It is commonly believed that the expression GORDON-BENNETT! has its origins in the popularity of James Gordon-Bennett, Jr..

His father, born in Scotland in 1795, emigrated to the US to become a journalist and subsequently founded the 'New York Herald' in 1835. The many innovations he established within newspaper publishing, including European correspondents, illustrated news articles, the joint founding of The Associated Press (1848) and the first major use of the telegraph for news, led to a successful news empire which amassed considerable wealth.

It was his son, born in 1841 and known as Gordon-Bennett, who really captured the attention of the US and European populace. Born with a silver spoon in his mouth, he took every opportunity to live life as a playboy; his wild lifestyle and extravagant spending gained him notoriety in high society.

On one occasion, at a New Year's party (1877) being held by his fiancee's father, he got so stupifyingly drunk as to mistake the fireplace for a toilet and proceeded to urinate in front of his prospective in-laws and their guests.

Other tales include the occasion when, annoyed by the bulky roll of money in his back pocket, he burnt the lot in an impetuous fit. There are many more tales of his outrageous and extravagant behaviour, however not all cast him in a bad light, such as the numerous times he would donate large sums of money to charities.

He took over the management of the Herald in 1867, and proceeded to invest funds in newsworthy ventures.

His funding included the expedition by Stanley to Africa, in search of Dr. David Livingstone, and an ill fated attempt to explore the North Pole and Arctic region by G.W. De Long in the years between 1879 and 1881.

The 'Jeanette' expedition, as the Arctic trip was known, failed miserably and led to the subsequent death, via starvation, of De Long and 19 fellow crew members. There are several islands in Siberia that bear Bennett's name.

Gordon-Bennett was particularly partial to sports, being credited with introducing polo to the United States, his interests included yachting, in which he established the James Gordon-Bennett Cup for international races.

Trophies were similarly given for balloon and aeroplane racing, of which the Gordon-Bennett balloon race still exists. As further testament to his involvement in the various racing arenas, it was in 1904 that the Gordon-Bennett Motor Car Road Racing Trials were first run on the Isle of Man, which was the precursor to the world famous TT races, currently still held there.

From 1877 he lived in Europe, mainly on his 301 foot yacht, the Lysistrata, from where he administered the running of the New York Herald. He died in France in May 1918, aged 78.

The use of James Gordon-Bennett's name as an expletive possibly bears relation to his outrageous lifestyle and involvement in newsworthy stunts. Imagine opening your daily newspaper and reading yet another news item telling you of his latest antics, and as you begin to express incredulity with a "God Almighty", you restrain your publically unacceptable language and instead say....

A very simple thing. Men with fine horses who think there is comfort in the old fashioned stage-coach, went to England and had built for them old-fashioned stage coaches—just such gentle reader, as you saw on- the roads thirty years ago, fitted out complete with boot for baggage, and everything else, as it was in those days when coaches, or stages as we call them, wore the only means of conveyance. They put to them four blooded horses, and they put themselves in the uniforms of drivers, and they load on the roof all their lady, friends and they drive them. That is all there is about it.

It means that a certain number of rich young men choose to transform themselves into stage drivers.

There is a club of these amiable lunatics in New York the head lunatic being young James Gordon Bennett, the proprietor of the Herald.  Last Saturday the club made its first parade.

Seven stage coaches, rather more costly in style than those you used to see on your roads, drove-up in front of the Union League Club.  Seven very rich young men habited as coachmen took their places on the seven boxes, forty-five very rich and not at all beautiful, young ladies mounted the roofs, and with the upmost solemnity the cortege drove off, up fifth avenue to the park, and back again,

The streets were lined with people to see the procession, from Madison square all the way to the park; and if the object of the parade was to attract attention, the gentleman stage driver may be congratulated. But isn't it queer that in the day of steam men should attempt so absurd a thing as the revival of the stage coach?

The horses on these coaches are the very best that money can buy, and they are groomed to a degree that is almost painful.

By the way, the absurd fashion of cutting the tail of the horse in the shape of a club, has beenadopted bore. Pray let it be confined to New York, for it is as ugly as sin.

James Gordon Bennett Jr. could hardly ride a horse and he claimed to be first to play polo in America? Here is an article hot of the presses in 1876 that says probably not....

As the NEWS predicted, the New York polo players are not up to the ways of the frisky little Texas ponies used in the game…
After innumerable falls the New York polo players have discovered that Texas mustangs are not adapted to the business, and complain that these little steeds are unmanageable. The fault is not in the ponies, but the riders, a Texas cow-boy can track a hare on one of them with more ease than a greyhound. They can be checked instantly in mid career, or wheeled on their forefeet as a pivot…
The New Yorkers want some Texas boys to teach horsemanship, and must learn to ride if they want to keep pace with the fashionable world…
Galveston Daily News - Tuesday, July 11, 1876 Polo played near Dallas Texas

According to James Gordon Bennett Jr. it was all about him.

Strong evidence says it was the English Texans who first played polo in the United States? 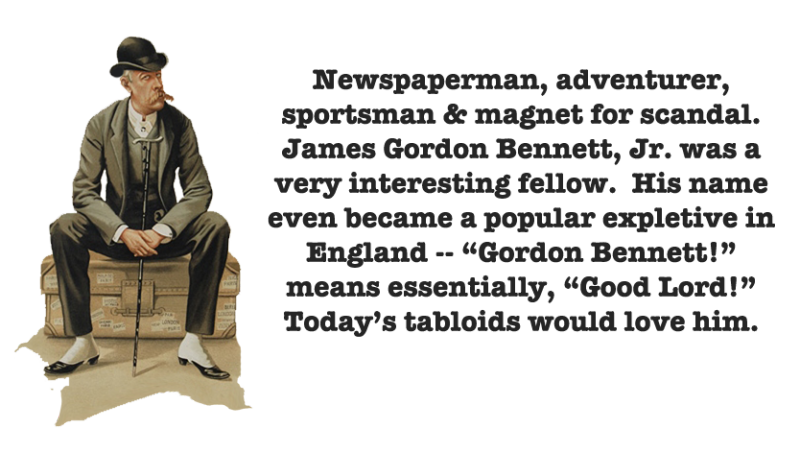 Barry Gilmour, chairman of Royale Oceanic, says “When American publishing tycoon James Gordon Bennett Jr. built the yacht Lysistrata for $635,000 – which in today’s money is $200 million – he truly changed the world of yachting. He was a larger-than-life character and he started the trend for yachts that are not only works of art in their own right, but also directly connect with the aspirations and the personality of their owners.”This is the yacht that spawned the mindset of chasing the biggest and most luxurious solution you could. The 95.7-metre three-deck Lysistrata was a steam-powered giant and one of the world’s most technically advanced ships. She had a crew of 100, and featured Turkish baths, theatres, and a specially padded stall for an Alderney cow to ensure an adequate supply of fresh milk at sea.Where is she now? She was sold to the Imperial Russian Navy during World War I as a gunboat and renamed Yaroslavna. After the Russian Revolution she was renamed Vorovsky and became a fisheries protection vessel. GL Watson tells us that she was broken up in 1966.